Cape Clear Island off the coast of County Cork Ireland in Roaringwater Bay. It is also known by its Irish name Cape Cleire and is the southernmost part of Ireland that is inhabited. Most of its 100 inhabitants speak both Irish and English as it is a Gaeltacht (Irish-speaking area). It is a small Island, just 3 miles by 1.5 miles and is a popular destination for bird watching and whale watching. It is a beautiful unspoilt island with megalithic standing stones, a 5000 year-old passage grave at Killickaforavane, a 14th century castle and a 12th century church ruin. The position of the old lighthouse on the island meant that its light was frequently obscured by fog and mist. It was decommissioned in 1854 when the nearby Fastnet lighthouse became operational.

Saint Ciarán was born on Cape Clear and is the island’s patron saint. Each year on March 5th the Islanders celebrate his feast day at the holy well at Trá Chiaráin.

The island holds a special place in the memory of many Irish school children who spent time at one of the two Irish summer schools on the island still operating June through to August. 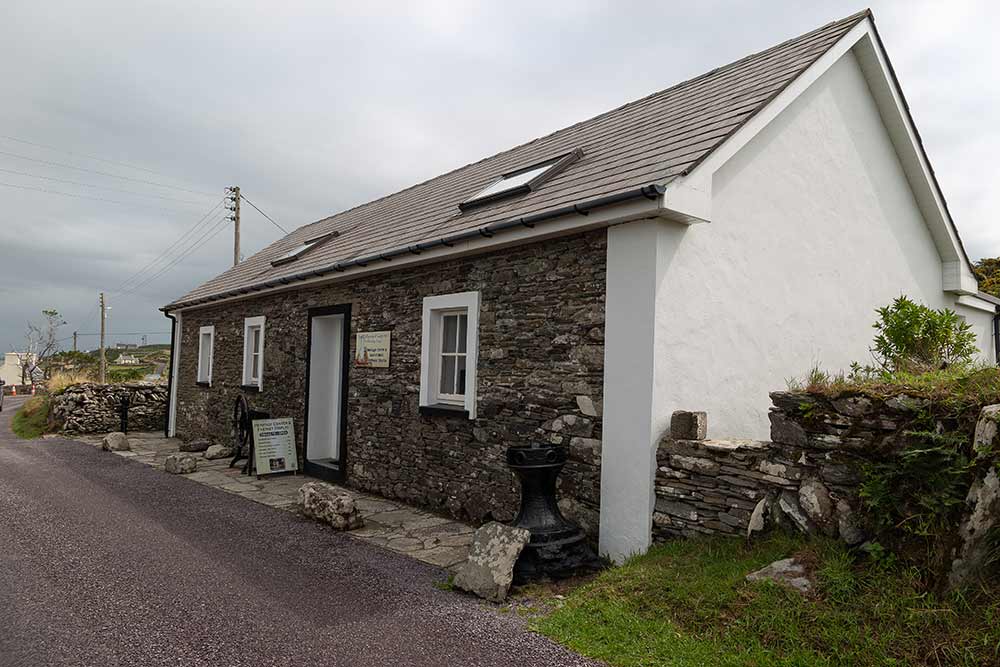 There is a small Heritage Centre on the island which includes a museum, exhibition area and archive including a display about the Fastnet Rock Lighthouse. The building was originally the girls school and is open daily during June, July and August and during other times by prior arrangement.

Your ferry ticket includes a short shuttle bus ride to the heritage centre which is up a steep hillside overlooking the harbour. At the time of writing this post we understand that the return bus ride is not included but available for a charge of €2. 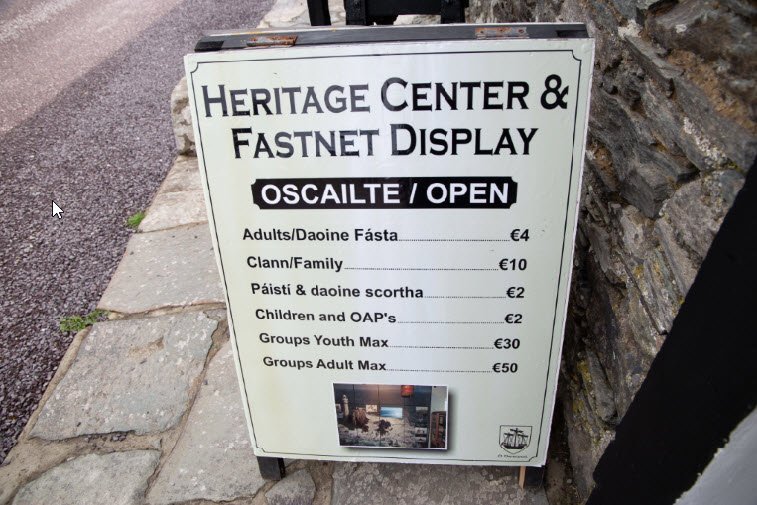 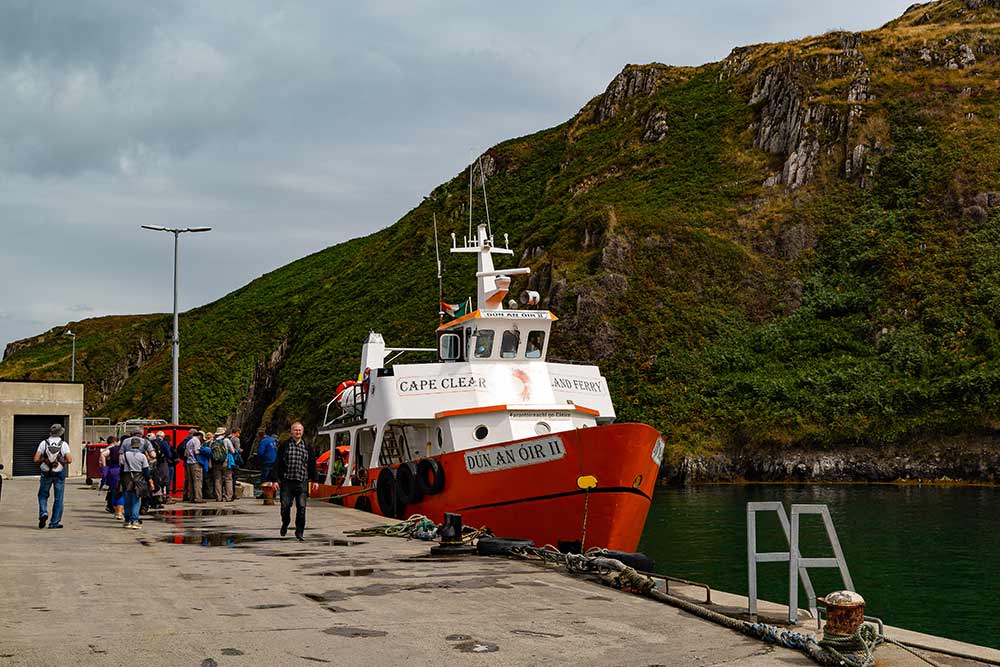 Catch a ferry to Cape Clear from Baltimore all year round (weather permitting) or from Schull during the summer months from June to August . The journey takes approximately 45 minutes.

If you want to stay on the island you can choose from B&B accommodation, Glamping or Camping including a novel option to stay in a Yurt on the island. 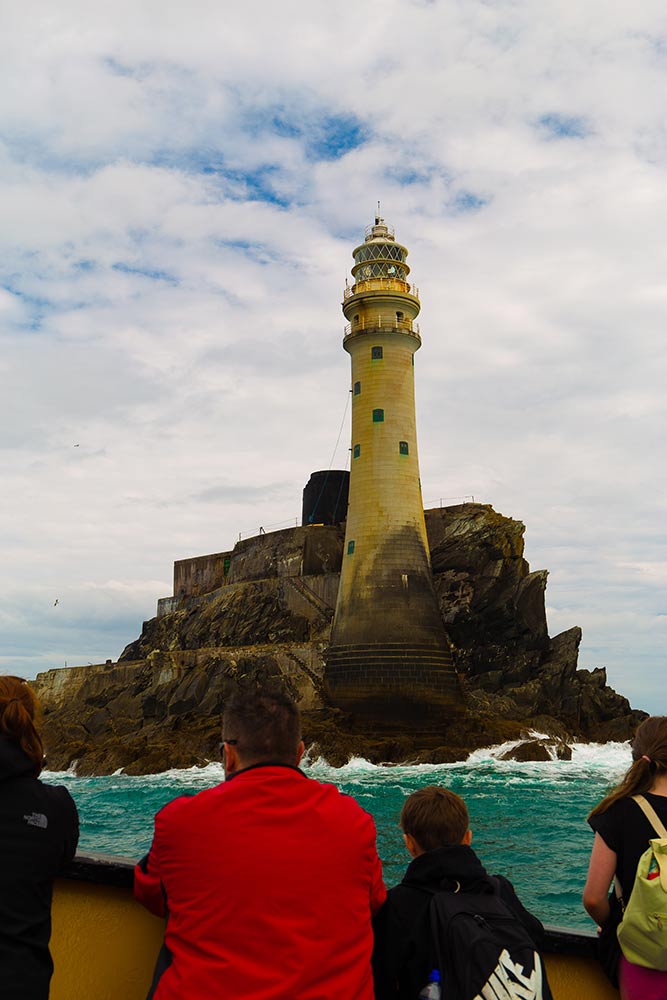 Fastnet Rock Lighthouse perches on a small rock 6 kms off the Cork coast. It is also known as the Teardrop of Ireland as it was the last sighting of Ireland that emigrants had on their way to America. The stump of the original lighthouse, a sister light to nearby Calf Island (now also a stump) still remains with the newer, improved, lighthouse rising about it – an impressive feat of engineering.

You can take boat tours around the rock from both Baltimore and Schull via Cape Clear. More details here https://www.capeclearferries.com/fastnet-rock-tours-timetable/.

These waters have been the scene of numerous sailing tragedies and rescues over the years most notably the rescue operation during the 1979 Fastnet Race by the RNLI, Coastguard, RAF and Irish Naval service. 303 yachts set sail from Cowes, on the Isle of Wight in good weather on the 605-mile course around the Fastnet Rock on to Plymouth via the Isles of Scilly. A storm struck sinking 25 boats with the loss of 15 lives.

Again in 2011 the crew of an American yacht taking part in that years Fastnet race were rescued off Cape Clear near the Fastnet Rock.

The story of an English born, blind academic and goat herder who chose to live on Cape Clear Island

In 1979 Ed Harper came to live on Cape Clear with his wife Winifred. They planned to breed goats on this hilly and remote island despite the fact that Ed was blind and neither of them spoke Irish, the main language of the islanders. It is a fascinating story and one best told by means of the series of links listed below. We do not attempt to portray even a small part of the inspiring life lead by Ed Harper on Cape Clear but hope to offer an interesting glimpse into how this man, a musician, sociologist, local politician and goat herder forged a rewarding life on Cape Clear.

You can support the Irish Guide Dogs Association at their website here. https://guidedogs.ie/ 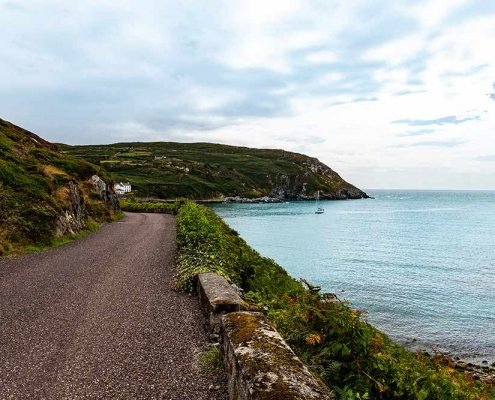 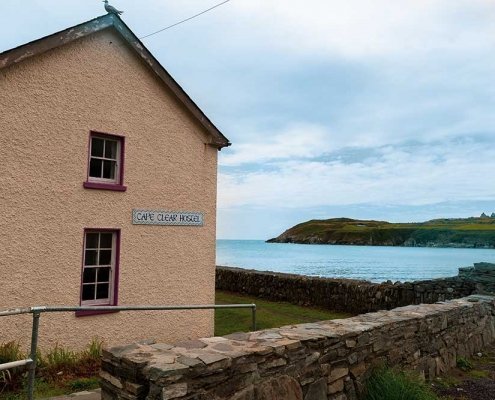 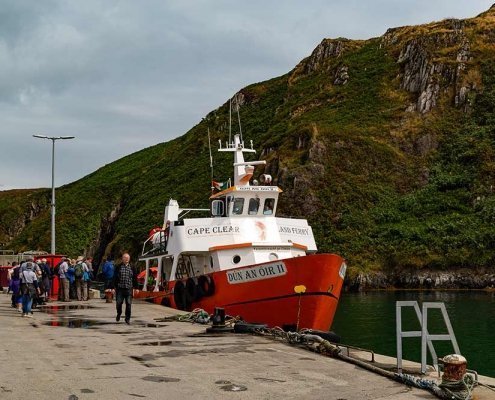 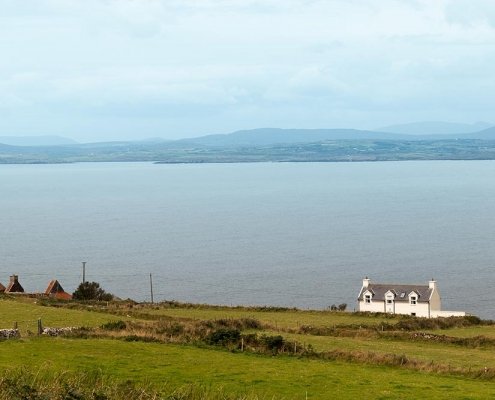 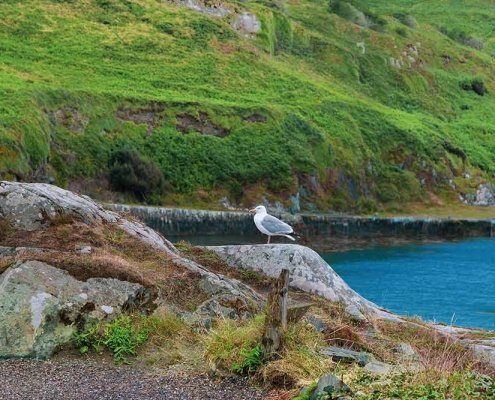 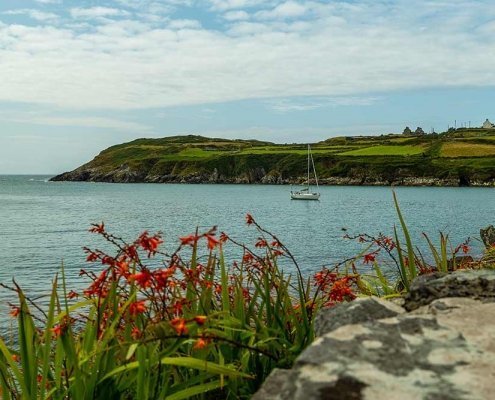 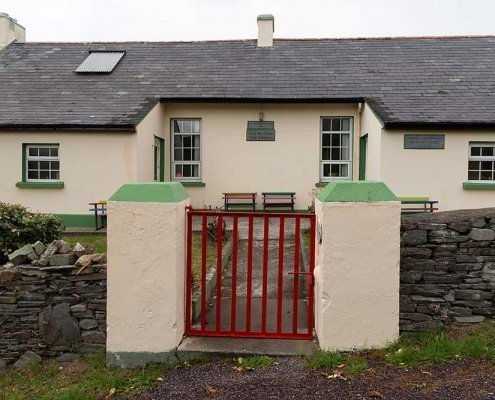 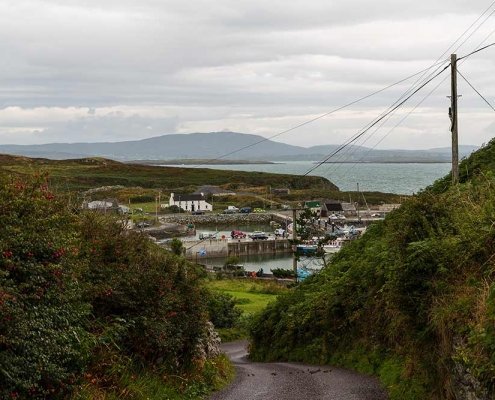 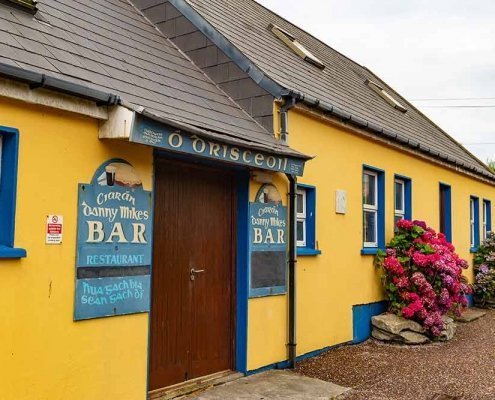 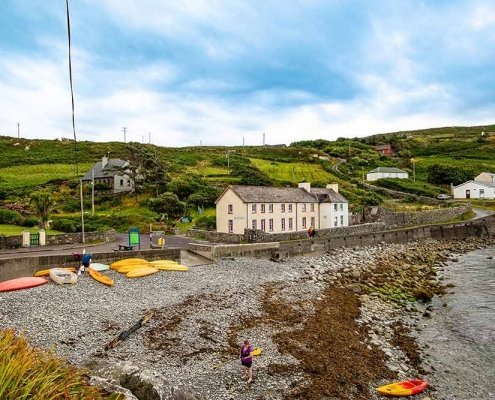 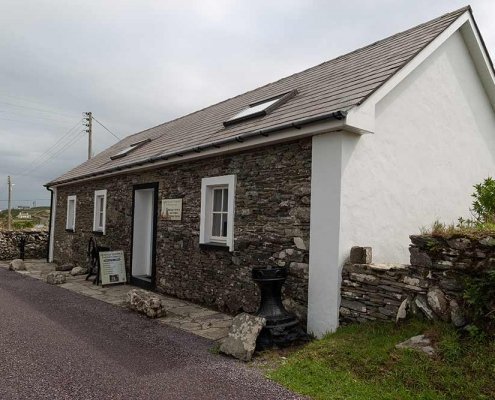 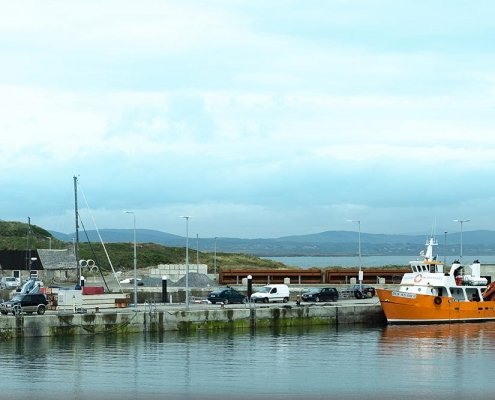 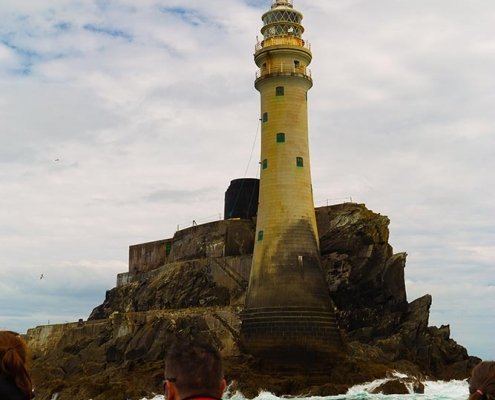 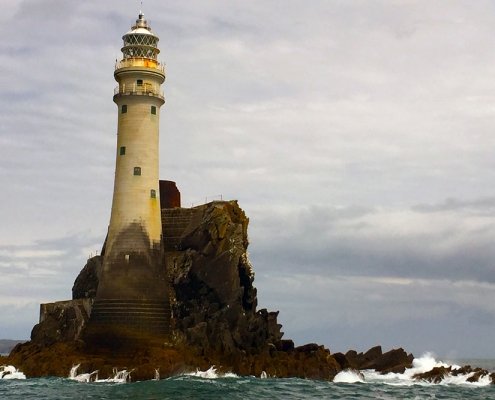 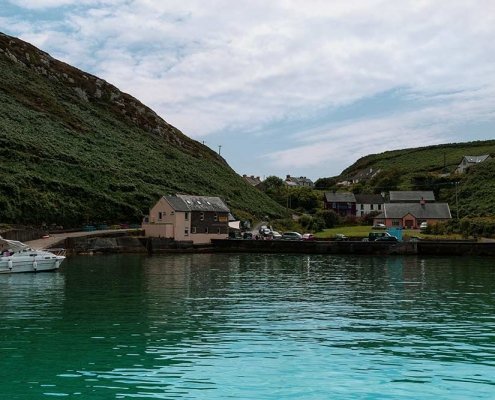