Beale Strand, also known as Beal Beach, stretches for over 3 kilometers along the Shannon estuary. The extensive stretch around the headland makes a wonderful long walk.

Caution: There are extremely fast currents in this area making swimming dangerous.

Sea Angling is good at Beal Point. The road down to the car park and the beach is on the western side of the point. Fish may include dogfish, flounder, dab with occasional bass or turbot.

On a stormy night on the 30th of November 1834, a two-masted sailing ship called the Thetis sought shelter in the bay having crossed the Atlantic ocean from Quebec in Canada. The ship had a cargo of pine timber. Despite the valiant efforts of it’s Captain, Captain Younghusband, the ship was driven onto the shores of Beale Strand having lost much of her crew aboard in the relentless storm.

Nine sailors drowned on that fateful night with the remaining men swimming ashore.They were welcomed into the homes of the Kerry locals and over time, the bodies of those that perished were washed ashore and buried at Lissadooneen Fort. The dramatic tale does not end there however for when a salvage operation was carried out on the wrecked Thetis it was found that she had also carried a cargo of contraband tobacco. The crew were arrested and tried in Tralee for smuggling.

Today, the remains of the Thetis shipwreck can be seen beside the car park in Beale, testament to the fact that these parts truly deserve the name of the Wild Atlantic Way! 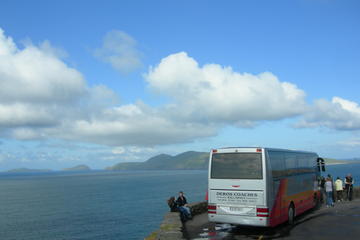 Just a few miles down the road, is the village of Asdee, the birthplace of Jesse James’ father. He emigrated to Missouri where young Jesse James was born in 1847. The local pub in Asdee is called the Jesse James Tavern.