Bray Head is a signature discovery point on the Wild Atlantic Way and deservedly so. It is situated on the western end of Valentia Island and affords great views of the Skellig Islands.

This vantage point lends itself ideally to the purpose of a lookout and this spot has served as such for hundreds of years, possibly longer. Just short of the summit is Bray Tower, a signal tower built by the English in 1815 during the Napoleonic wars. More recently Bray tower was used as a Navy signal station in 1907 and again during World War 2 ( or ‘the emergency’ as it was known in Ireland). It was during this time that the coast watchers set out stones spelling the word EIRE to let passing pilots know that they were over (neutral) Ireland. Some of these stones remain today.

There is a car park (charge €2) from which one can walk the 90 minute walk up to the tower and again a little further on to the highest point. Views from the Tower are great and even more spectacular from the summit. Take care not to stray too close to the edge and supervise young children.

Valentia Island was the site of the first transatlantic telegraph cable landed in 1857, it’s western terminus being Heart’s Content in Newfoundland. By the turn of the twentieth century six of the ten telecommunication cables that crossed the Atlantic Ocean came from stations in Kerry – Valentia, Ballinskelligs and Waterville and so operated for one hundred years.

The advent of the transatlantic cable meant that accurate longitude measurements could be taken for the first time by using a telescope & an astronomical clock connected via the telegraph cable. In 1862 Star passage times were measured which allowed the Longitude differences between the Greenwich Meridian and the Harvard College Observatory to be calculated. This verified an earlier experiment that took place in 1844 actually measuring distance physically in conjunction with time between Valentia Island and Greenwich in England.

The first evolutionary steps of a Tetrapod

The fossilised footprints of a tetrapod (known locally as the dinosaur footprints) believed to have been created over 385 million years ago can be seen on the northern shores of the island. Head for the Valentia Island Radio Station which is signposted and relatively easy to find. Next to this you will find the track way. It is incredible to think that when these tracks were made this part of the world was south of the equator and joined to North America! 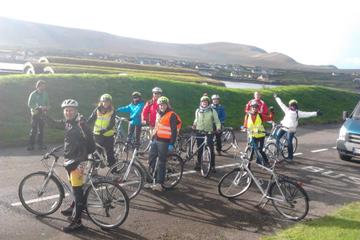