The Blasket Islands is a small archipelago of 6 main islands plus many tiny smaller islands lying about 5km off the Dingle peninsula. These islands are Ireland’s, and Europe’s,  most westerly point. The islands are no longer inhabited, having been abandoned in 1953 when years of hardship and emigration meant the aging remaining islanders could no longer manage the difficult task of rowing their traditional canoes  (naomhoga) to the mainland.

The main Blasket Islands are:

The Great Blasket – An Blascaod Mór

The village is at the eastern end of the island. You can wander among the ruined cottages and consider how despite the remote hardships the villagers endured they still managed to contribute so much to the Irish cultural heritage. The first written works to be published from the oral Irish culture came from these people, most notably the Irish storyteller Peig Sayers (remembered with mixed emotions by many Irish school children who had to study her works!).  Below the village lies An Trá Bhán (the white strand). Take a ferry from Dunquin Harbour. The crossing takes about 20 minutes (weather permitting).

This island was traditionally used by the islander to fatten cattle. There are the remains of a herdsman’s shelter. One can only imagine the challenges of such a role with only beauty and solitude for comfort.

Tearaght (or Tiaracht) boasts Europe’s steepest funicular track. It’s lighthouse, dating from 1870, is the most westerly lighthouse in Ireland. The island has a Puffin colony that served as a source of food and feathers for the Islanders’ bedding.

Inis Tuaisceart (Inishtooskert) is often referred to as “the Sleeping Giant” due to the shape of it’s silhouette. The island has the ruins of an oratory known as Brendan’s Oratory.

This island was inhabited until the middle of the last century and was used for summer grazing for the sheep and cattle of the Great Blasket. Inishnabro is known for it’s spectacular rock formations that resemble a Gothic cathedral (Cathedral Rocks).

This island was the home of the Daly family until it was abandoned in 1904 and is also remembered as the holiday home of former Irish Taoiseach Charles Haughey. It too has a puffin colony and a native red deer herd. The ruins of an early monastic settlement can also be seen.

If you can’t manage to visit the islands you may wish to visit the Blasket Centre on the mainland where you can get an idea of the islanders’ lives and appreciate the importance literary legacy of the area.

Search Near The Blaskets 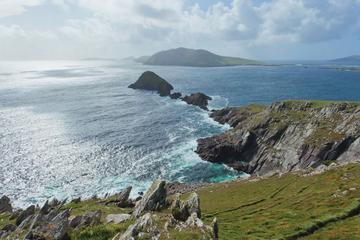