You are here: Home / Blog / Kates Road Trip / Stop 1: Site of the Battle of Kinsale in Cork

On the way to Kinsale Town

I had been so looking forward to getting starting on my Wild Atlantic Way Road Trip. As I mentioned before, I live in Kerry so much of Cork, Clare and Limerick and of course all of Kerry is easily accessible for me. I decided to start in County Cork and work my way northwards.

The first Discovery Point on this route is The Old Head of Kinsale so off I headed on the road to Kinsale town.

The Stone of Destiny, Site of the battle of Kinsale in 1602

On my way to Kinsale I sought and found an intriguing Stone Chair standing at the side of the road at Millwater Crossroads about 2 miles outside the town on the R605. The Chair, or sculpture, is called The Stone of Destiny and was installed in 2001 to mark the site of The Battle of Kinsale in 1602.

On January 1602 Irish forces were defeated by an invading Elizabethan army leaving twelve hundred dead or dying. Their blood coloured the mill stream driving the local mill causing the millers to rename the ford ‘Ford of the Battle Slaughter’.

In 2001 on the 400th anniversary of the Battle of Kinsale the Stone of Destiny Chair was erected to symbolise the loss of Irish sovereignty. It is made of 4 stone slabs brought from the four Provinces of Ireland to represent the participation of those who joined the chieftains at Kinsale in 1602.

On the sunny day of my visit it was sobering to think of the scenes that took place in this now peaceful and pleasant spot.

Stone of Destiny ChairSite of the Battle of Kinsale 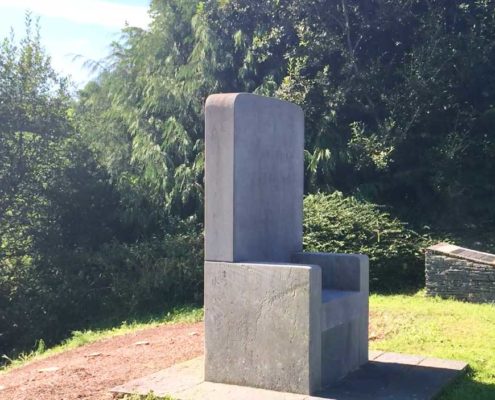 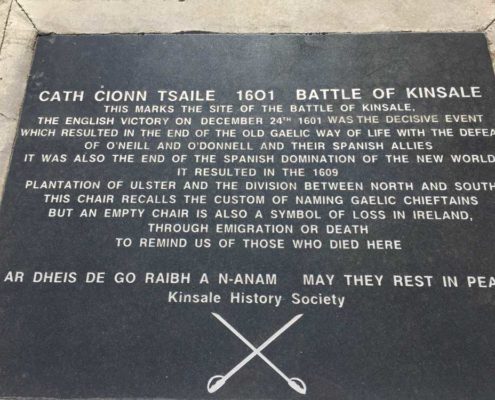 Read More about this county at Cork Wild Atlantic Way

Wild Atlantic Way Online is a privately owned commercial website. We are a small team living in Kerry.

We strive to provide useful accurate information and services to those wishing to visit Ireland’s Wild Atlantic Way or who are planning or researching for their vacation in Ireland.

Our website receives a small commission for any tour, accommodation, transport booked on our links or Amazon product purchased. This does not affect the price you pay. This allows us to continue with the development of this online resource.

We are not responsible for the fulfillment of these services. All inquiries or complaints should be made to the provider in question.

Stop 2: The Colourful Cork Town of Kinsale & St.Multose Church
Scroll to top
Translate »
We use cookies to ensure that we give you the best experience on our website. If you continue to use this site we will assume that you are happy with it.OkRead more